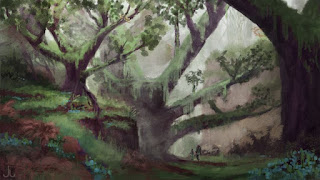 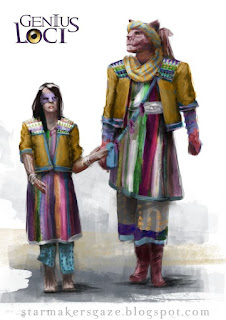 A golbehl ist a Gderan animal that feels so unloved it's become a proverb. Golbehls are slender, long-legged animals with grey fur and red ears, the markings in the whiskered face make it always look sad. Golbehls quickly approach humans to become friends, but are so easily startled and so emotionally fragile that they just as quickly leave their would-be masters; only to try again with someone else days later. Only in the ninth year of being a pet do golbehls quite suddely evolve into loving, perceptive, and hard-working companions. Then they have unmatched qualities as guards, are smart and quick on the uptake, and can learn surprising tricks. Always do they need much love and appreciation. Golbehls are only kept by few, envied trainers, but many try training a golbehl.
Golbehls live in the lesser green forest and can become fourty years old in the wilderness, and much older in captivity. 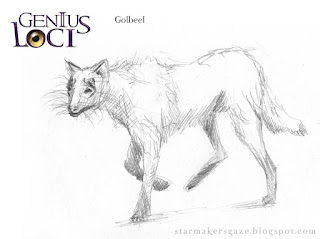 "Golbehls are so hard to train it's always a suprise seeing somebody with one, and I've met them as companions of people from adolescents to elders and soldiers to housekeepers. Even the romantic raganaj have no advantage in training them; but a surprising amount of brownforesters are accompanied by golbehls."
— Kihpabe, traveller

Artists' notes
I've been typing 'til my fingers bled inventing animals and plants for all regions lately, and now it's high time to sketch some and make them public. Simple sketches will have to do for many, however.
Posted by Ranarh at 05:13 0 comments