Voices and the Great Spirit

Voices are on either side of death - very young, very old, or terminally ill, with one exception: elves can be voices for life. Voices are blessed as they truly understand the world. Knowing that no-one else does, they gladly give advice but rarely bother explaining themselves. They don't trade or sell their services. Instead they live off the communities' generosity, but many cities feature halls of the voices, which are kept in order by the ruler. Voices are always right; following their advice will always solve the problem, but it's often hard - still, refusing them is said to be a recipe for rotten luck.
Voices are marked by a sign on their throat. 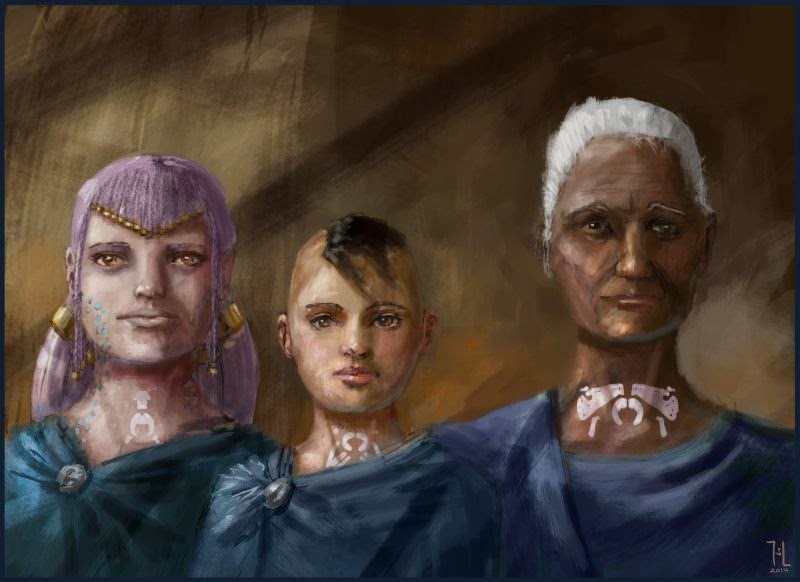 "Akani in the desert is said to be a voice. You're not the first pilgrims to seek her, but most people I point her way come back crying and refuse to speak. Her advice does seem to work, though."
— Peqati, innkeeper, to his guests


"No, you don't notice how you loose your ear for the Great Spirit. When I turned eight, I began to misunderstand my fellows, took easier tasks on my own accord, and left the hall with ten without sadness. I barely remember now, but I know the voices are right, and that comforts me."
— Cirinall from the White Stones, scribe

Artist's notes
Many fantasy settings have detailed religions, which I generally like, but it seemed I had only two choices: one religion for all (boring), or teeny-tiny cults everywhere (too much work). So I turned to animism, with spirits providing supernatural plot-hooks, and kept the thing/being that created the world out of the equation. Hopefully, this way I will avoid "How could (insert name of deity) let that happen". In a way, the speakers in their desire to understand the world are indeed theosophic truth-seekers (which I suddenly realise is definitely a nod to the wizards of LotR).
Posted by Ranarh at 01:50