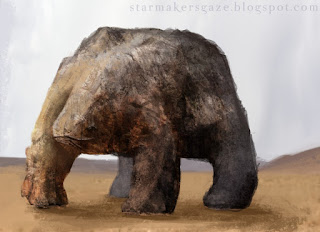 It's said that each continent or element has its own biggest animal, which are so attuned, or incredible, that they function outside the normal workings of living creatures. Hillers are considered the embodiment of the powers of the earth, and thus to be Lozirian animals, although there are some in Sawa as well, and nobody knows what hides under the canopy of Gdera's forests.

"Some of the hiller tribe spoke to the hiller by waving flags. They said they used them to talk about which way to go, but from what I saw, their conversation was much deeper than that."
— Sasi, traveller

It's said that they are born under mountains, and when they are big and strong enough, lift the mountain up and walk away. Their gargantuan bodies are covered with rocks and sediment, and they are big enough to house a large tribe. Hillers move very, very slowly, nobody knows what they eat, and there's barely a way of communicating with them, although those who live on them can tell if the hiller is happy, sad, or calm. Hillers seem to generally enjoy the company of humans, especially when they decorate their mobile home.


Artists' notes
The original German name is Berger, which would translate to mountainer, but it lost its whimsicality in the translation, and I went with hiller instead. Walking mountains are a wonderfully fantastic idea,  and they make several appearances in Genius Loci. I haven't even invented all biggest animals yet, but the horr in the seas and the clouders in the skies are of similar incredulity.
Posted by Ranarh at 08:31