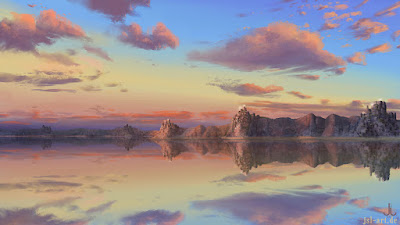 
Artists' notes
When I dotted city states onto the maps, a whole lot appeared around the Tsiranian Gulf, and I wondered how they got along. The more they became, the less they did, and now the "Streitende Städte" are a mischievous bunch of rascals. It spun away into the political situation of the entire region; Urlakal's civil war fitted perfectly. I love it when the open ends of my world connect seamlessly.
Posted by Ranarh at 09:58