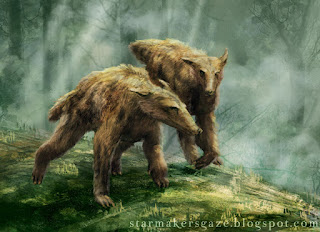 The burrmo are large predators of the Great Forest in Gdera. They are about three meters long, with a plushy tail, long head, and dirty-looking greenish fur. Burrmo are man-eaters - literally, in a group of people, they'll go for the humans first. Otherwise they hunt appropriately large quarry. The burrmos' ferocity is infamous, and being allowed to wear any part of them is an honour; most wanted are the thick fur and hide, claws, and teeth. Several body parts make a festive dish for hunters. Only skilled and extremely shrewd hunters will get a burrmo, however.


"Korr the mage invented burrmo-steel, that is all but indestructible. Entirely appropriate, but the good joke didn't bring my arm back."
— Kalvemar, hunter

Burrmos have been long known for stealing children from humans and other species, and also other animals. Rrani, gubras, even pervons have been seen hunting alongside them and obvioulsy been part of the pack. The best known abductees are the burrmo princes Darous and Darem, elven twins that have been their spokesmen for years, and are taken as bad omens by travellers these days. The actual lord or lady of the burrmo are not publicly known.


"They dropped down from the branches, struck down everyone but the humans, ate the iunas, and fled with their victims. Nine days later two of them emerged from the forest again. They never said how the got away from the burrmos, but they had been given provisions and pointed the way. I later heard they left the Forest for good."
— Ninkang, Greatforester


Artists' notes
I love inventing animals, and burrmo are among my current favourites, from their spelling to the abduction habit, but sketching them was hard. This is often the case for especially my critters since there are so many possibilites and my descriptions usually come first; but writing and drawing work differently, and sometimes I describe things that are really hard to get across visually.
Posted by Ranarh at 05:24