"A few years ago, some wise guy thought if he murdered an Eastwesterner, there would be an open spot for him. It speaks for their skill that the fool survived his stunt. I think they made him a listener as punishment, but that won't improve his chances either."
— Adjila, Gamahanian 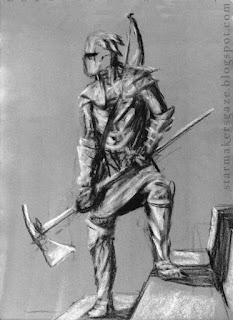 
"As students we used to imagine legendary warrior team-ups, and we all agreed: The most impressive would be a bunch of Eastwesterners and a handful of Brightholdians. We excitedly shuddered at the thought; I do hope that a need for something like that never arises."
— Renolen Megurin, captain

The legendary feat of the Eastwesterners was the protection of Gamahan during the Splinter War. When the shapeshifter armies invaded, the Eastwesterners were the spearpoint of the counterattack, and their devastating blows, fierce tactics, and unwavering line freed Gamahan within only days; a service the Gamahanians have not forgotten.


Artists' notes
Factions, orders, and guilds are among my favourite subjects in computer rpgs; which to choose, how to balance the sometimes contradictory principles, what ranks to obtain in which order to gain what special feats and skills...
Ever since I learned of the existence of oversized bows - to be drawn lying down and using both hands and feet, with arrows the size of spears - I wanted to have a fantasy element where that is the actual main weapon, and here we are.
Posted by Ranarh at 04:32