The Area, and Starmaker 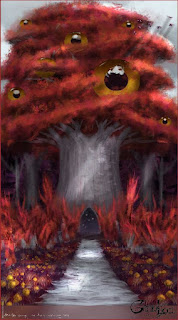 The Area ("Die Gegend") is the parallel mindworld of the Genius Loci setting. It is a global mindscape that can be entered at any point and time, and shows a great deal of own will. The Area is most riddlesome, diffuses the borders between minds, and dazzles the travellers' perception, but also holds great wisdom. Many travellers are cosmologists seeking deeper understanding, answers to a mystery, or need help with spirits. Other travellers are voices, and former voices accompanying them. The real world and the Area influence each other to some degree; the rules are mysterious.

Certain rituals shall ensure the safe return of the traveller. Protective charms exist, but are rare, and a stable mind is the best armour one can have in a land that seems to be made of thought. Those who enter do not leave a body, but are not fully material in the Area either; it is unknown what exactly happens to the body. Items can sometimes be taken from the Area, sometimes not, and it has a knack of keeping things from the travellers arbitrarily.


"The borders between yourself and your surroundings were blurred in the Area, as were those between your companions and yourself. Anyone's nightmare could become everyone's."
— Nin, traveller

Inside the Area, one will find a landscape that quickly becomes twisted, confusing, and dreamy. Travellers find it increasingly difficult to distinguish between the real world and the Area. While seemingly arbitrary, the Area is not considered evil, but too complex to understand. It does hold treasures of knowledge; but it is hidden in riddles and wrapped in illusion. 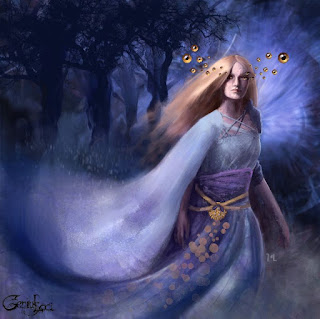 Starmaker ("Sternenschaffer") seems to be the only constant inhabitant of the Area and has never been seen outside. She is very mysterious, and it is unclear whether she is an actual person or just another illusion of the Area; even the earliest travellers report meeting her. Starmaker is named after her favourite sign and mark; a shining star that she leaves as a clue. She appears as a human woman with blonde hair - very rare among humans - and golden eyes that seem to be and look everywhere. She is as willful as the Area itself, and, like a dryad, follows a set of unfathomable rules.

"In the same eyes we looked and looked not, from the same voice we shivered and did not. She was a sparkle of moonlight on a moved pond, a spirit in the wind - never clearly seen, but known to be there."
— Kan Rama Jin, elder voice


Artist's Notes
I have always liked surreal artwork, figurative speech, and symbolic meanings. The Area is a way of really going overboard with that. More than in other Genius Loci artwork, the invention goes both ways - sometimes I paint and forge rules out of the result, other times I plan ahead before I paint. The Area is not a dreamworld in the classical sense, nor a ghostly aftzerlife. It was mostly influenced by the Norse otherworld, where you could end up after just crossing a hill or something equally mundane, and that is how the Area works as well - most importantly, unforeseeable.
Posted by Ranarh at 07:06