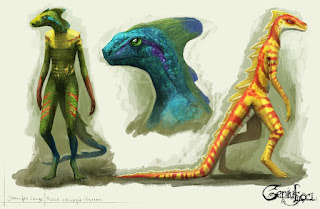 The garren (sing.: gar, also "the scaled people"), are a multicoloured lizardlike race with four
fingers and a spinal crest. The tail is flexible, but clumsy, and can be used as a weapon. If the tail, fingers, or other small body parts are lost, they can be grown back. The crest is covered in soft thin scales and flexible between stabilizing spikes. The colour and pattern can be changed by eating certain foods; the patterns are not predictable. Garren have quick reflexes and are very enduring; they are also cold-blooded, and prefer the warm regions.


"We were halfway towards the tavern door when a gar drew his blades and exploded among us. Within the blink of an eye he had created a carnage the likes of which I've only seen on the battlefield."
— Riinan, mercenary 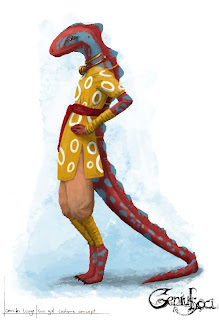 Psychologically, garren are impulsive and usually the first to act. They tend towards polarized views; being aware of that, they readily seek counsel for important decisions. On the bright side, life isn't boring with garren around; while they can be incredibly lazy, they like sports and love to experiment.


"If you get a garren trader alone, act, and try to rush him as much as you can - you'll get even the most ridiculous contracts through. But be careful of the voices' sign - they are not the same as those garren who have never heard."
— Valini Jiraal, trader 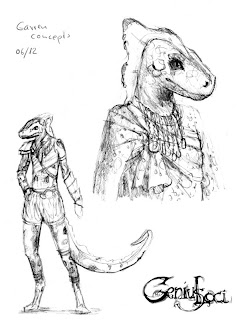 Artist's notes
I've been asked if a tailed race would voluntarily wear trousers. My answer is, yes of course they would, if their culture tells them to; since there are no cultures on Kitas that don't wear anything, the garren would be dressed.
A tail is a nice body part to play with in pictures; while I imagine the tail to be lizard-like and dragged behind, it can also flinch and twitch like a cat's. Sometimes in fantasy settings, lizard folk are slow and dim-witted, violent, or heavily armoured; garren are a lot more like birds, agile and curious.
Posted by Ranarh at 08:17