"The natives of Markohan are wonderful to behold in their colourful dresses. Each of an array on traditional accomplishments grants them one more colour and fabric to wear, and their masters are a splendid sight indeed."
—  Rafach'queai, diplomat 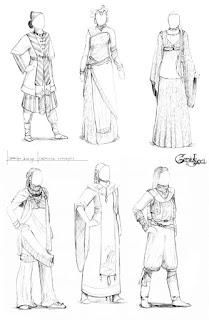 Costume is a vital part of kitaian cultures. Many have symbolic parts, like colours or specific accessoires. And since clothing and attire tell so much about the wearer, most people, even in foreign countries, will not change their costume as long as it's survivable - furs may not be worn in the hot desert, but their wearer will insist on his ochre sash representing his leadership. How strict a dressing code is varies widely, however; while some peoples define everything from threads to colours to cuts, others only demand a somewhat similar appearance.

"Oh, to be stripped of the blue, and the stingray leather! I had tried myself at the noble art of boatmaking and failed - now I am marked. What worse fate than to be without the colour of the sea!"
— Sadda-Lon Daia, Markohanese 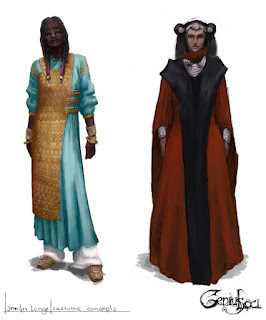 Artist's notes
Costume is an important part of my world's design. Costume sets people of different origin apart, different descendance, wealth, influence, occupation, age... I often dislike the modern look of games, as well as the gritty, "medieval" approach of starving peasants in undyed, torn tunics. Most of my inspiration comes from historical costumes; I am always interested in small bits, like Vikings inscribing their hands and nails with rune-charms, or that the ancient Egypts believed their life force could escape through their throat and wore necklaces as protection.
Posted by Ranarh at 08:19