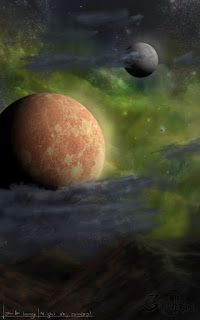 "The moons in the sky are as useful to us as flowers on the fields; we do not have to concern ourselves with them, but life is richer if we do. However, it is said that the moons have strange effects on fleeters."
— Jio Farsight, wizard


Two moons accompany Kitas through the sky: the large orange one is called Companion ("Begleiter"), the smaller white one Runner ("Läufer"), circling both Companion and Kitas in a fast pace. The large turquoise star is called the Eye, visible just before dawn and just after sundown, and good telescopes show that the Eye has a herd of own moons. Kitaians can see two nebulae in the night skies; the summer shows golden green clouds littered with stars almost filling the sky, the winter features a smaller, deep purple nebula with dim dots of light.


Artist's notes
I was influenced by the wonderful night sky of The Elder Scrolls game series; I had loved it since Morrowind, and it was clear to me that I wanted a nebula as well. When I couldn't make up my mind between two colours for it, I decided to have both, and therefore two nebulae.
The stars play no significant role in Kitas' magic or superstition. While some cultures believe the moons have an effect on people, the stars are mostly good for navigation. There is no astrology on Kitas, and no prophecies; I have always hated the idea of fate.
Posted by Ranarh at 03:11