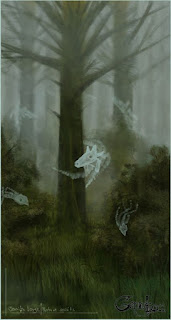 There are several kinds of spirits in the Genius Loci setting, the most common being nature spirits. They live in natural objects and landmarks - from small plants to mountains, from rocks to major lakes and rivers - but some very old artificial objects have attracted a spirit as well. There is no hierarchy between nature spirits; the size of their living place and their power are closely related, but no spirit can make his place change out of its nature, like affecting the shape of a tree.
Nature spirits resemble a floating skull with a handful of segmented tails. They are usually friendly and playful; they speak little, but giggle a lot.

"Being led by nature spirits to get somewhere is a tricky business. The bigger spirits don't like to leave their homes, and the smaller ones seem to enjoy your company too much to just lead you to where you want to go."
— Cyma, traveller 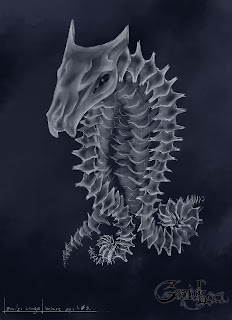 Artist's notes
Nature spirits don't die when their home is destroyed, but they will be grumpy about it. I wanted Genius Loci to be largely free of religious conflict, and turned to animism. On Kitas, people apologize for destroying natural landmarks or killing animals; the spirits in turn don't take revenge (usually). And of course the kodama spirits from Princess Mononoke were an inspiration. Threr is only one spirit per tree in Genius Loci, though.
Posted by Ranarh at 03:53 0 comments