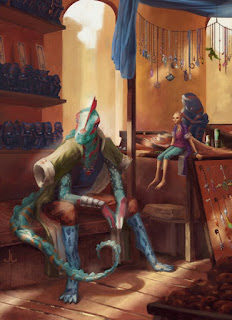 Pendulum makers create many items used in supernatural affairs; pendulums for mappers and travellers to find their way, or totems and echo tubes for spirit collectors in which they trap the deads' spirits. The items themselves aren't enchanted in any way, or at least don't need to be, but the tiny details can make a speaker's or collector's life much easier, like the proper colour and quality.


"Buy from Trenan in Southern Third Street, his totems are reasonably strong. Those from the fourth floor pendulors are too difficult to burn in cleansings."
— Gajikar, to a fellow collector

Pendulums can be used to find all sorts of things related to what they're made of, and can be surprisingly precise. The craftsmanship doesn't really matter, a clam on a string will do, but will find too many things. This is the real art of pendulum-making; to create a pendulum that will find only what is sought.

Artists' notes
When I invented totems, it was clear that not just every idiot could make good ones, and I doubted all collectors had the time to make them themselves, and so "Pendelmacher" were invented. I always liked the idea of holding pendulums over maps to find a specific site or item. And because many gems and metals have certain esoteric properties, there would be someone who makes special pendulums for finding water or Area thresholds or whatever.
Posted by Ranarh at 07:01 0 comments

More speedpaintings of different subjects are published on deviantArt now: a portrait of a tribal shankeh, the Northeastern Blades - a powerful set of artifacts -, and the plasmat concept. You can also learn more about them in their respective blog articles about shankeh, artifacts, and the plasmats.
Posted by Ranarh at 09:07 0 comments


Elves, humans, dwarves, and beja can have children together. Children of elves are all elves themselves, there are no half-elves. This leaves three kinds of halfbreeds to be considered.
It's been in debate for millenia what influence the mental traits of the parents have, if any.

Kelromes are children of humans and beja. They have four eyes, which all see normally, without the beja's sight of ultraviolet. Their skin is dark, and the humans' fitness is easily inherited; unlike humans, kelromes do not get a cold. The extra eyes are lost in the second generation, unless both parents are kelromes.


"No, my hair is rather docile, thank the spirits. My father shaves twice daily and cuts his hair with what can only be called a shortsword."
— Martel, verkenor

Parunees have dwarven and beja parents. They have two eyes, the thick hair of dwarves, and slightly darker skin. Their hair stops growing at some point and isn't quite as colourful as a pureblooded dwarf's, tending to darker tones. Parunees are strongly built, can see through stone like their dwarven parents, and live much longer than beja.


"I serve alongside raganaj in the guard, that's not something just anyone can handle. Thanks be to mother for her strong bones, and to father for his height."
— Aldjagran, guard

Verkenors are children of dwarves and humans. They can see at night as well as dwarves but not through stone, their hair is long and thick but of plain colours. Especially with northern humans, they are strong, their height is between both parents. Like parunees, verkenors live for very long. 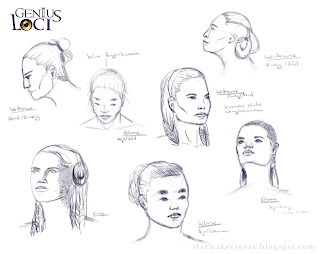 Artists' notes
Just like there are tiny differences between the single appearances of the species, so are halfbreeds not entirely the same. Most of the mixed-blood traits are lost in the second generation unless the second parent is also the same halfbreed. Racism being considered insane in most places, I can't imagine people being called names for being not pureblooded. It will be interesting to see what Kitaians think about the new halfbreed possibilities, with shapeshifter spells on the march.
Posted by Ranarh at 08:05 0 comments