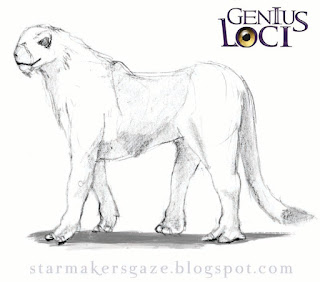 The funi oldjor are creatures of legendary might. In A'ruhs, the rhu'khach language, their name means "king of honour". Funi, as they are called for short, live in the Lozirian wilderness. They are hunters, and it is said they choose one opponent whom they hunt down, to challenge them to a duel. And that there's no escape from them. The duel need not end in death, but there is a certain etiquette to follow; it's considered impossible to hunt a funi outside of a duel it chose itself, and on the few occasions it was tried, the funi created terrible devastation. The few survivors swore the funi could whisper.


"Then it bowed to me. And then it came charging. I parried, I struck, I jumped aside; it bit, it kicked, it tumbled me like a ball. Finally, breathlessly, I came to stand again, but only just; it bowed again. I bowed back. Then it left. I have never come home from hunt without quarry again."
— Eralin, Lozirian hunter

A funi oldjor is as tall as a human, slender, and white with dark saddle and mouth, and has a red-tipped tail. It's said this red colour was the blood of its slain enemies when it swishes through it.
Funi have recently gained even greater renown when their rulers, Lord Giva and Lady Tchiboyé, came to human society to teach them shapeshifting.


"The speakers think one of them is a human, but don't know which one. So human shapeshifters never died out after all? Or is shapeshifting a gift a beast lord gives their love?"
— Genarha, Lozirian

Artists' notes
Ah, mythological beasts, I could invent them all day. These are rooted deeply in the history of Genius Loci already, since their lords came forward to teach the lost art of shapeshifting again. And they are the first who were a couple, almost all other lords I invented are single. Except for the burrmo, who stole children.
Posted by Ranarh at 06:01 0 comments