"How hard can it be?"
— Agorisan motto

Agorisai in the Vernan Bay of northern Lozir is a widely visible landmark and is considered the oldest city after the council cities. It was built by the rhu'khach, evident by the ending -ai; every new building is erected on the ruins of an older one, and so the city is growing towards the sky. Streets are named after people, tribes, cities, events, and the number of the floor, for example, Ganronian Seventh Street. 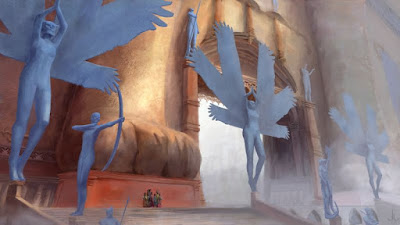 Agorisans are good craftsmen, optimistic, and think they can do everything themselves, from cooking jam to drawing protective circles. They're aware of their city's political and economical power and are generous, if not entirely above a small self-serving deal here and there.


"We were thrown out of our own house by the goldfairies, and re-invited nine days later when the construction work was done, keeping the floor above from caving in. They could have just told us so. Or their human staff, for that matter."
— Rahimbe, Agorisan

Agorisans wear at least four layers of clothing, rich in traditional patterns, and colourfully dyed, with sandals and painted feet, and the hair knotted high on the head.
Foreigners love the beautiful clothes, but barely understand the heraldic meanings.

The city's creative architecture and old buildings are left from the Diamond Age when the rhu'khach ruled, their palaces and official buildings are spread over the city's rock spires. Being so old, Agorisai is also littered with relics left by spells and Area travellers. For example, one can't see the opposite side of the street of Telfur's Ninth Road; Gald's Tree changes the floor every year, and it's custom to donate its sweet fruit to the voice hall.


Artists' notes
When it became clear to me that the rhu'khach of old had an empire, they had to have left some ruins or such, but then I thought, why ruins? People of Earth still live on the same sites today than thousands of years ago, so why not keep the cities of the rhu'khach thriving as well.
Now that I've arrived at inventing cities, there is a whole new world of detail open to consider. I want them to be at least slightly real - while I loved the depiction of Minas Tirith in the LotR movies, and agree that for the purpose of storytelling I didn't care where it gets its food, with no apparent farmland for miles around, I do want to take care that my cities can be supplied. People have always been creative about making their living place work, so I don't worry about every tiny detail, just the general needs - water, farmland, trade routes and so forth.
Posted by Ranarh at 04:16 0 comments 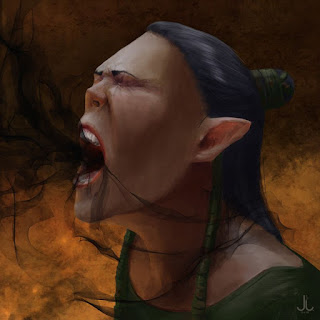