Art on deviantArt: Gubra and the Great forest caravan

Two new artworks are now published on deviantArt with new quotes: A concept of the gubra, and a caravan trekking through the mid-level of the Great Green forest. Both have their own articles in the blog as well, which the gubras share with their Lord Gahatenge, while the forest has more room to itself.
Posted by Ranarh at 07:47 0 comments

"If you think the Star Sea is littered with treasure islands, you really have no idea what it looks like under the surface. Let me show you."
— Krriinana, seagirl

Seafolk live in the seas, of course, preferring saltwater, but they live in brackwater as well. They are humanoid, but with an long, sluglike tail instead of legs. Seafolk have a skin pattern of filled irregular dots, six webbed fingers, and large black eyes. They don't have to breathe air, are weak but agile, and have good senses.


"Some had been worried after the construction of the canals, how the seafolk would fit in. But the children, of course, used the basins and flooded steps to be jolly with the seafolk kids, and when they grew up, seafolk seemed quite normal."
— Wyrnan, Avnidaran 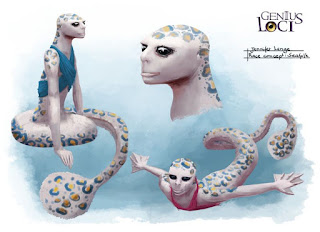 Seafolk live with the other species where they can, as normal members of society. While being limited to saltwater, architecture often accomodates for them with tiny canals or stacked basins, and some rich cities even built waterfilled tunnels and elevators for them, like the Greater Talash-Kehs capital, Mourinor.
Off the coasts, the seafolk harvest the treasures of the seas; they farm algae and clams and herd fish, they act as pilots for ships, and as midwifes for garren - who have certain ideas about their eggs - and of course they find pearls and corals. Famous products are the clam soap made from fat clams, and algae silk.


Artists' notes
Of course there are mermaids in my setting. They're just not the tradiotic vixens luring seafarers to their death, they're people. I most enjoy the idea of cities with tunnels and canals and fountains so seafolk can be about with everyone else. I wonder what their relationship with the fleeters may be, as those prefer freshwater and the seafolk lives in the oceans.
Posted by Ranarh at 04:25 2 comments