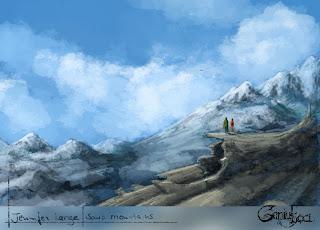 
Artist's notes
Volcanism fascinates me, and I have Sawa as a playground for it. The trouble with painting volcanic landscapes is that everything's covered in smoke...
I found it difficult to describe Sawa's diversity correctly; it has landscapes like Iceland and Alaska as well as Polynesia-inspired tropical zones. The landscape changes so frequently - mountains coming up here and there and sinking back into the ground - that mapmakers can make good coin here.
Posted by Ranarh at 07:57 0 comments


The Four are a symbol occuring everywhere in Genius Loci. The number refers to the four elemental forces of the world - Water, Fire, Earth and Air, and Life - embodied by the Four Creators of the world, and their magical foci, the Four Weapons. Each is assigned a cardinal point, colour, and many more associations: character traits, times of day, spells, continents, plants, minerals... Each culture adds own representations and local symbols; the Four Weapons usually take precedence and take many shapes. It is said that the Four maintain the world's balance.


Artist's notes
The Four were one of my earliest decisions about Genius Loci. Red for water because many rivers on Kitas come through rock containing iron and are reddish, especially in Sawa; blue represents the fire at its hottest (its a concern to me whether this will confuse people too much).
The rhyme is also an old invention. I wrote it practicing calligraphy; I was writing Tolkien's poem of the one ring, and wanted something similar for Genius Loci. It is widely used on Kitas, from children's rhymes to the chorus of Nuralk's famous epos "The Four" (the insane often mumble it, too).
The Four are very important to the setting. They're the closest thing to gods in Genius Loci and have many more features which I gradually develop.
Posted by Ranarh at 09:39 0 comments