I have recreated or rather expanded some older works for Genius Loci: the Yellow Forest Borderlands, Fog in the Ryaq, and the Salt Flats. Now they're much more grand and therefore closer to what I had wanted them to be. The Nightly Traveller from a recent blog post was also published on deviantArt, and finally, there's another landscape piece of the red forest.
Posted by Ranarh at 10:17 0 comments 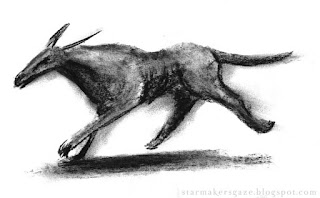 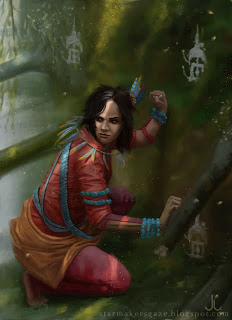 
Artists' notes
There are a whole lot of other, friendlier orders with altruistic goals, but describing the freakish, strange orders with intransparent agendas is fun. The others will get their time as well, of course. Meeting a Nightly Traveller is like the opening scene of an urban fantasy novel, when you see a modern mage do something incredible with casual ease.
Posted by Ranarh at 03:16 2 comments

The speakers have entirely opposite (but to the voiceless, indistinguishable) plans how to achieve understanding of the world. Wizards believe that the world will make sense only as a whole, while mages seek to understand each detail first, then assemble them all. Both ways have been codified early in history by the greatest thinkers of their time, who are today's idols of their respective beliefs, Ghabnah and Turachgekhan. 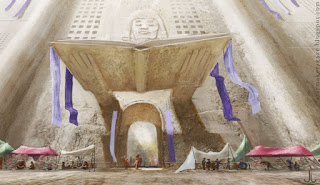 Ghabnah, who is thought to have been a beja mage, wrote the first magical tome collecting the spells strung together from the words of power. This First Book of Magic, or Ghabnah's Book, also contains the principles mages should follow. It is constantly being revised and modernized, and there are different interpretations of her thoughts.

"Look at any one thing and find that it is made of parts. Learn their workings - learn every thing's workings, and you may finally understand the world's workings as well."
— Ghabnah 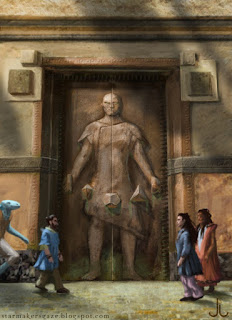 Wizards follow the teachings of Turachgekhan, a rhu'khach sage, who said that the world is wondrous and whole, and can be only understood if one dares to broaden one's mind to encompass it. Today, wizards are acknowledged as skilled holistic thinkers. Each spell is invented at the time it is cast and has widespread effects.

"Look at how marvelous the world is intertwined, and everything inseparable from everything else. We know the Great Spirit is at the foundation of it all, but we only know this, we do not grasp it - and when we finally do, I believe it will be most grand."
— Turachgekhan


Neither Ghabnah nor Turachgekhan said anything about hating on the other half of the human supernaturals. Some very optimistic philosophers even believe in unification of both schools. The fact however remains that in six millenia, no-one has learned both the way of the mages and wizards.


Artists' notes
There had to be idols among the speakers, and the most important idols would of course be the founders of their way of life. There's much to say about speakers, spells, and the philosophies. It's sometimes thought that maybe spells are "poisonous", because it's only after casting their first spell that speakers are set in one way.