I need reasons to post images in this blog, so when I paint something that's not immediately related to an article, they may lie around for a while. But of course I do a lot of sketches and speedpaintings for Genius Loci, and have decided they might as well be posted on deviantArt. For now, there are the illustrations for the Broken Jaw Rocks (already published here), Insanity (also blogged), and Area Gate, a surreal piece for Genius Loci's mindscape.

Why do I tell you this? Because the quotes are never the same, and you might just learn something new about Genius Loci.
Posted by Ranarh at 03:42 0 comments


Whisperers have been described as the juvenile form of speakers. Indeed, whisperers that become powerful enough eventually turn into speakers, losing their abilities in exchange for the capacity of channeling the Fifth Power into spells. Whisperers are born, but one cannot learn to be a whisperer, while becoming a speaker is possible to anyone. Whisperers' abilities are always limited in number and strength. Some whisperers go to great lengths to keep their skills just low enough to not become speakers, to avoid the inevitable fanaticism both traditions are stricken with.


"I change the Fifth Power. My family forbade me to learn a profession, to marry, to have friends with strange ideas. I will live for nine centuries, and I'll never be anything but the power source for the speakers of my clan."
— Namtiin Giwanjur, whisperer 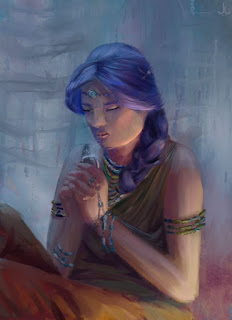 All whispering skills are limited to the user, they cannot use them outside of themselves. Therefore, while their teleportation is by far the most reliable, they cannot transport people with them, and cannot lift anything with their mental touch, but only protect or enhance themselves. Whisperers are subject to the mystical number five - mastership of five skills makes them speakers. They are treated wildly different throughout the cultures; some employ their unique talents like regular jobs, others see a duty for them, still others fear them, or value their talents but disregard the whisperers' individuality.


"Damned spells! I could jump from here to a room in Agorisai without fail when I whispered, now I can barely see the city upon my arrival!"
— Jukolar, wizard

Artists' notes
I wonder how it must be to have the choice to either never further your abilities or become a fanatic. Glad I don't have to make it. Whisperers' most important ability is to make artifacts - one could say that most have been made by them, although there are no more whisperers than speakers, who also can make them.
Posted by Ranarh at 07:09 0 comments

I'm trying to get away from only showing concepts of Genius Loci, and provide proper paintings instead. Of course, they take much more time, and sometimes it simply takes too long to keep up the speed of three or four blog entries per month, especially since some need more than one image. Such is the case with the coming article on mounts. For now, there's the zehgraams (German: Segramen) on deviantArt: http://ranarh.deviantart.com/art/Genius-Loci-Zehgraam-race-563588823
And also with some WIPS and sketches on cgsociety.
Posted by Ranarh at 04:25 0 comments 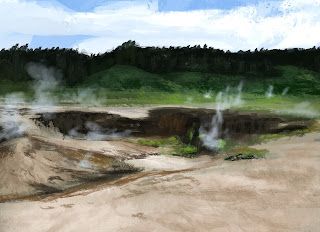 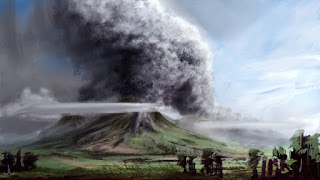 
Artists' notes
Volcanoes are so cool. I particularly love pyroclastic clouds and the lightning inside ash clouds during eruptions, and still I'm glad not to live around any active ones. I had to pull a bit of fantasy green thumbs, though, as new volcanic soil isn't nearly as fertile as "rich in minerals" sounds. It does make for beautiful geysirs though, with colourful minerals layering on their rims.
Posted by Ranarh at 02:19 0 comments