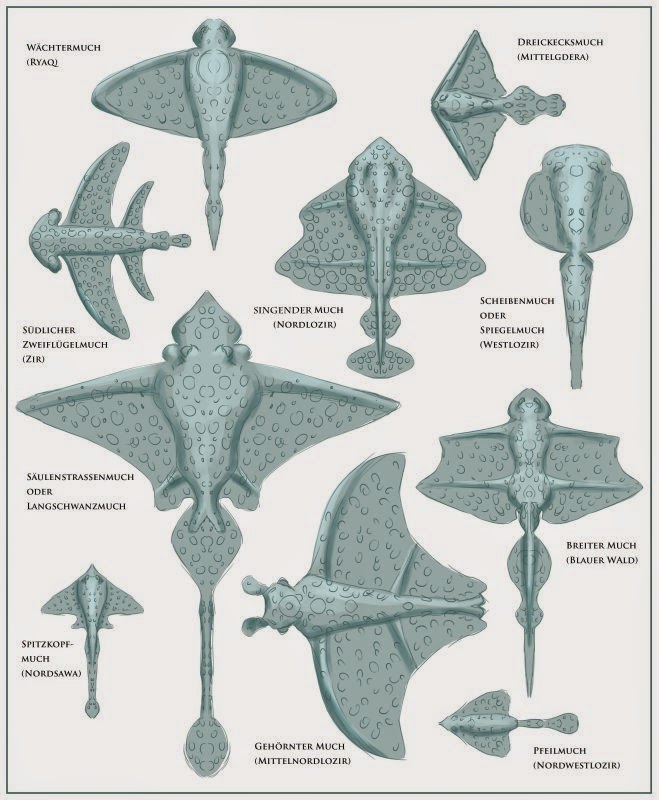 Artists' notes
The German original, "Much", is a difficult phonetic translation; speak "mooch" with the same ending as Scottish "loch". So, yeah, flying rays, I couldn't stop myself, although it's a bit of a fantasy/sci-fi trope, but I love the shapes so much. There are places (in Africa, I think) where actual rays come to the shore to play with children and be petted, which is very, very cute, and I brought some of that into moochs' behaviour.
Posted by Ranarh at 03:03 0 comments

Following the disastrous worldwide conflict of the Splinter War in the 48th and 49th century, shapeshifting was outlawed by any country that considered itself civilized. It was agreed that shapeshifting changed one's heart; how should one be unaffected by turning into beasts or monsters?
About three centuries ago, however, evidence was unearthed that indeed the mind remains untouched by the change. Of course, even if news travel fast, not everyone today knows or accepts this. It might take shapeshifters centuries to regain acceptance.


"Naturally, the shapeshifters fulfilled a role in society that, when left empty, created a hole that we only now slowly begin to understand."
— Vatarna, mage, in a lecture 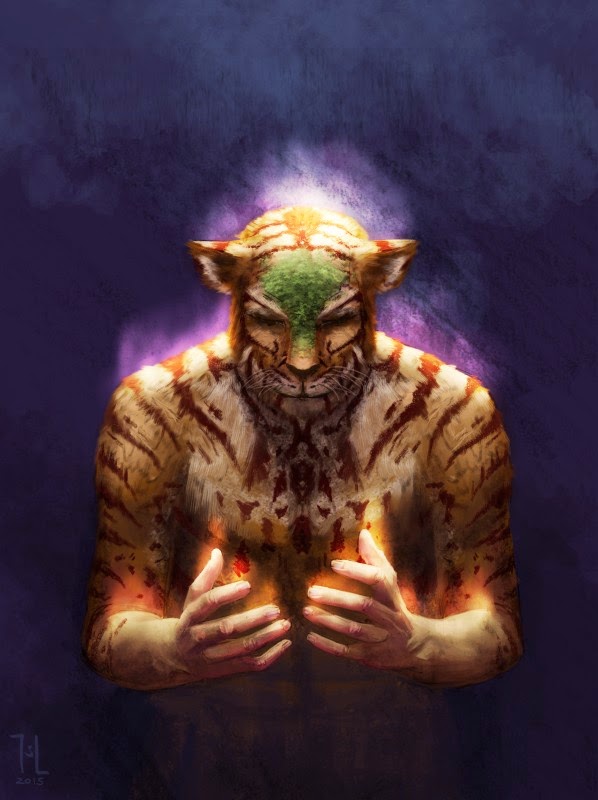 Shapeshifters are spell users, whisperers, or were born with the ability. Whisperers can only change slightly. Spells are powerful, but don't last very long. Born shifters, depending on skill, can change their appearance or physiology indefinitely, and turn into creatures or even things. These are still feared today even by openminded experts.
Although it's hereditary, few shapeshifters are born. It's more likely to have shifter children when the parents shifted much, but most shapeshifting is done with spells. Much spellcasting in turn means the children are likely to be speakers, and speakers are never shapeshifters.


"The elves were the first to jump at the chance of changing their outsides. I suppose it was to be expected - if regular twins want to be different, how must it be to look like everyone in town?"
— Blinai Namtoneh, historian


Artists' notes
I had created a huge war with shapeshifters early on. The logical conclusion was that shapeshifters would fall victim to genocide; prejudice and paranoia would bring anyone to the gallows who was suspected to have the gift. I then found that I robbed myself of a charming magical feature of fantasy worlds and thought hard how to get it back. I finally decided that the relentless effort and insatiable curiosity of the mages could rediscover the truth, and here we are.
Posted by Ranarh at 10:18 4 comments 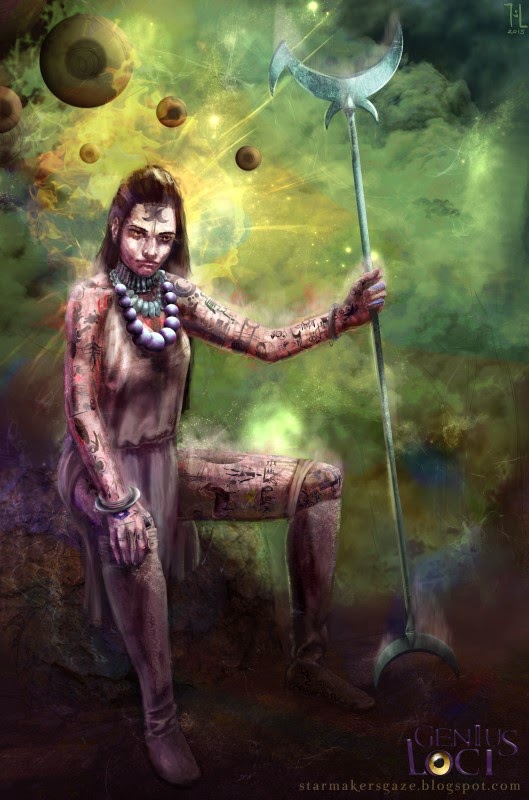 When the sometimes imcomprehensible Nakani was called "headless" first, she took the edge off this insult's knife by wearing the nickname proudly. Nakani has been accused of many things, and even freely admits she is at the center of quite a few plots and conspiracies, some of dazzling reach and consequence, like the dethronement of King Mahetbe, or the fall of the Gisterian Stones.

"Headless? No. As you can see. But restrictionless, which is what most people seem to be using the great gift of mind for."
— Headless Nakani

Nakani is a whisperer and powerful in artifact creation, combat, and endurance, and a master with the starblades, a staff weapon invented by the Order of the Violet; it's rumoured she were their leader, but she only admits to being a member. The mysterious order has a house in Agorisai, where Nakani can often be found, but it's unclear if it's their headquarters, although most suspect it to be.
Nakani has six dead husbands, more tattooed signs than signmakers deem safe, no fear, and razorsharp wits and tongue. And she is quite brilliant, and an advisor valued by many rulers.


"By the Spirit, she claims she had made it so that the road crosses the fields, and the echo inevitably met its maker, both eradicating each other. And this was her solution when we asked her to rid us of both the echo and Hetambe, nine years ago?"
— Councilwoman Tangange


Artists' notes
Nakani was fun to design, but first came as the idea of a spokesperson of the Order of the Violet - the very idea there is one, is considered half insane by almost everyone. I like the weirdos who speak almost entirely in riddles but turn out to be right every time, so you inevitably start to listen to even their strangest ideas, because the solutions always work.
Posted by Ranarh at 08:11 3 comments