For the most part, Kitas is tribesland. Even large cities harbour tribes, sometimes by other names, like house or clan. Few titles are hereditary, most have to be earned, and powerful peoples chase off irresponsible rulers. Absolutism is very rare and looked down upon by the neighbours; tyranny, while existent, will be attacked by those living nearby and feeling threatened. Honour compels rulers to do their best, and folklore gilds the memory of a good ruler; nobody wishes to be remembered as the Master of Famine, or the Queen of Pain.


"It was quite the coup when the Crowned put down her rights and duties, having been elected time and again for two decades. She claimed a country as powerful as Brighthold must not fall into idle content with its leadership, and resumed her position as cavalry general."
— Alnissai Whiterider, flagswoman

Mostly, a monarch or chieftain will be elected by a council; this will sometimes consist of nobles and accomplished celebrities like sages and warriors; other times of the entire tribe or city's population. City states sport democracies giving a vote to anyone of age, sanity, and citizenship. While children of previous rulers often have good chances to assume power, they are not natural choices. In the many nomadic tribes, any accomplished "hero" can attempt to get the tribe's support for rulership, although they don't often make young people chieftain.

Artist's notes
I describe Genius Loci as a "riddlesome fairy-tale". The fairy-tale part is that nobles are noble indeed - not the despots of dark fantasy, irresponsible and only driven by their own desires. Communities are small and one's deeds don't go unnoticed - valor is rewarded, crimes are punished. Every ruler feels the weight of the crown, and some are even treated supernaturally to be the good rulers the people needs.
Btw, "Brighthold" is called "Lichtfeste" in German, a difficult translation (literally: Light-Stronghold. Bah.).

Standing an average of two meters, hunes are the tallest people after raganaj. They are pale, almost white, and sport two thumbs - one on either side of their delicate but strong hands. Hunes are mute. They can make sounds but not form words, although they understand perfectly well, and sophisticated sign languages help them to communicate.
Hunes travel by branch, swinging along with great strength, and in the thick forests of Gdera achieve a good speed, and because of this they mostly live in Gdera. Hunes love eating, but for some reason, however much they eat, they never grow fat.


"Bedanga is called the silent lands for its majority of hunes, and indeed it's very quiet - certainly not because of their political insignificance... They have a surprisingly lovely singing voice, though."
— Nened Tramnak, Nalsiir trader 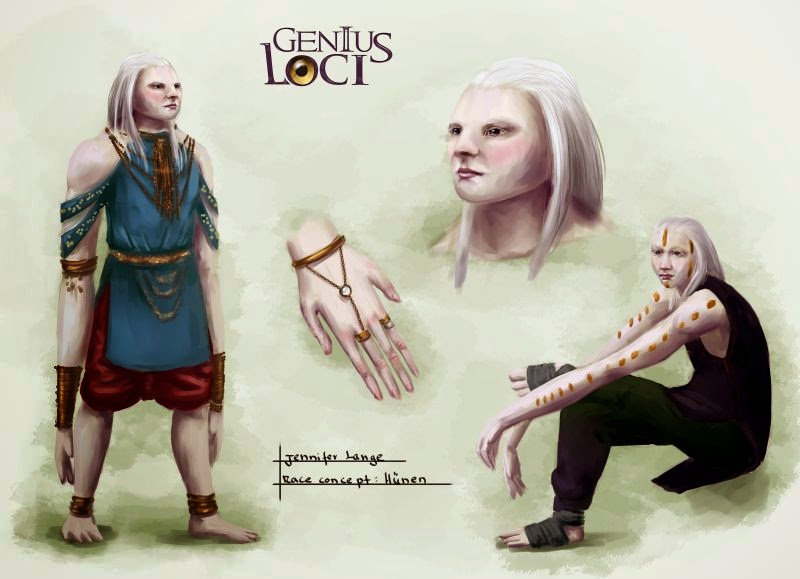 Hunes are a gentle and understanding people. They like company but can well be alone; because of their muteness, they are often granted a few childlike exceptions from social expectations - a role that not all hunes fancy, and there are notable warriors, scientists, and speakers among them. The royal family of the Gderan state Bedanga are hunes. Their muteness lessens somewhat in the Years of Sorrow, but no hune has ever spoken outside the Area.


"The third bowarcher might have been a hune. Or an albino, the records aren't clear. But then, aren't hunes albinos?"
— Anannta, mage

Artists' notes
The name is a phonetic comparison to the German word Hüne, which means a very tall person, but giant is too tall, so here we are. Speak: hoons. Hunes were among the major races once but when I made them mute I moved them more to the sidelines, where they now hang out with other known but mysterious folk, like the mul'ahman.
Posted by Ranarh at 06:40 0 comments 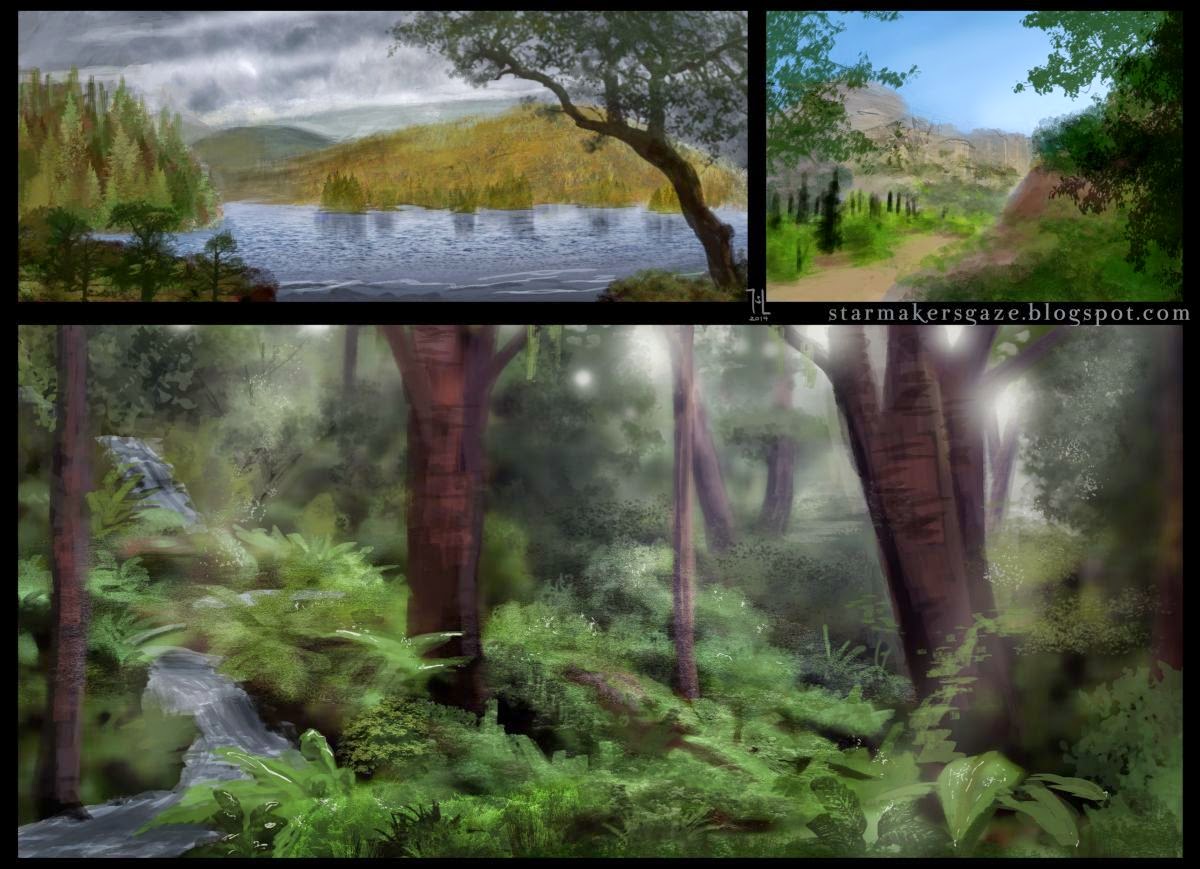 Artists' notes
Wow, an actually nice forest - how did I ever come up with this one. Animals here are much closer to what we know. No plants eat you, there's nowhere to fall to your death. Like the European or Native American forest of the legend age, anything can happen in here and no-one will be the wiser; you go around a hill and vanish. There might even be an affinity towards the Area...
With this, all types of forest on Gdera have been described.
Posted by Ranarh at 07:37 0 comments