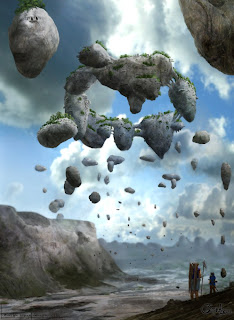 Artist's notes
Each continent is differently mysterious. In Lozir, there are vast empty lands that hold wonderful surprises. I feel about Lozir as a stage for adventure stories like Indiana Jones - some long-forgotten tribe lurking in the unforgiving wilderness, ruins of advanced civilizations long since forgotten, holding treasures... caves! Subterranean monsters! Emery storms! And yes, earth and air are indeed the same element in Genius Loci. "Scientifically", they represent the unliving foundations without which nothing could be.
Posted by Ranarh at 09:55 0 comments