Fleeters are one of the four kinds of elementarians, associated with each of the elements. Fleeters personify water, the power of the north. They are of jellyfish-like consistency, but very large and can walk on land, although they prefer to swim. Fleeters are playful, enjoy the company of river spirits and children, and are the first to help when a dryad enters the lands. Helping the dryad, that is. 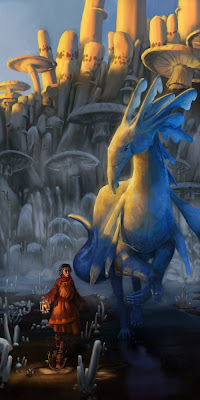 "A fleeter lives in our river and attends our summer's end festival each year. And every year it floods the entire city hill in its excitement, and is then crestfallen to see that we don't like our homes to swim away. It always helps to clean the next day."
— Grehja Sumin, Sawan craftswoman


Fleeter water is said to have healing powers, and fleeters often settle disputes (compromise is a principle of the north); they also innocently rearrange the landscape they live in, making them the elves' nightmare. As all waters, they wash out the ground, and fleeters are filled with tiny specks of gold that make them glitter.

"The fleeter of Chirahoni river ended a speaker war before it reached its peak. The people of that land are so grateful, the fleeter can easily be considered the wealthiest of them all."
— Dret, historian 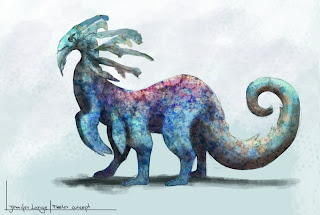 Artist's notes
Fleeters had a wide range of inspirations, from the Nightwalker of Princess Mononoke to centaurs some thing I saw in a "Tales of the Darkness" comic once. I wanted to avoid a too dragon-like appearance and overworked the concept a few times. It may still not be done, but I definitely like their character.