"The lonely dead know only anger, and vengeance, and their own will. They are not some romantic idea that obeys logic and society, their goals are often enough inachievable, and they cannot be reasoned with. I will teach you how to capture and unite them with the Great Spirit, and that is the only way we have of dealing with them." — Collector Novi Blue Seas, to her apprentice 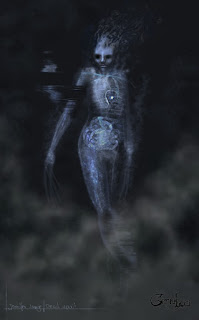 Among the several kinds of spirits on Kitas, dead spirits are the most common "artificial" ones. Dead spirits come into being from people dying under bad circumstances - murder, intense pain of mind or body, while obsessed with one thought, from incorrect or missing burial rituals - or simply because they believe they must become spirits. Dead spirits are wrathful and insane. They are obsessed with getting justice and will leave when they get it - which may be as easy as setting up a tombstone. In harder cases, spirit collectors are called. Dead spirits have the general shape of their former self, but strangely dislocated in places, with bones shining through and a clearly visible dark heart. Only powerful spirits can attack, but their presence always causes discomfort or damage - from headaches to heart attacks. All dead spirits will attempt possession.


Artist's notes
Ghosts and haunted places were among my favourite stories as a child, from poltergeists to banshees, Wiedergänger, Aufsitzer... the dead spirits of Genius Loci have many of those powers. They are not helpful at all, not to be trifled with, and can be encountered anywhere, which should be a lot of fun in stories to come. Darkhearts are powerful enemies of freedom, and therefore the dark heart suited the dead very well (I am very glad I had this idea).
Posted by Ranarh at 06:51 0 comments 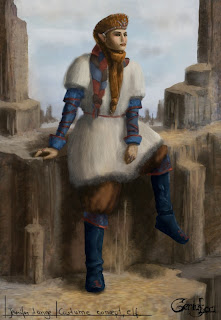 "Everyone is different, but elves are more different than others."
— kitaian proverb


Elves are indeed a strange folk. Their bodies work differently; what is normally edible or harmful kills or heals an elf. Some say it's because elves are slow inside - maybe they are right, elves live for over eight centuries. But then, no-one is as fast as elves. Their speed, balance, and elegance are legendary.
Elves have nearly black hair, green-circled black eyes, and beastlike features - all of them; for elves all look the same, like twins. Actual twins are one person in two bodies, extremely rare, and quite feared. There are no half-elves; children of elves are elves as well, and elves are more often than others subject to racist prejudice.
Elves can be voices for their entire lives. They can communicate with spirits easily, and many spirit collectors are elves.

"The most frightening person I can think of? An elven twin assassin."
— Oyofe, mercenary 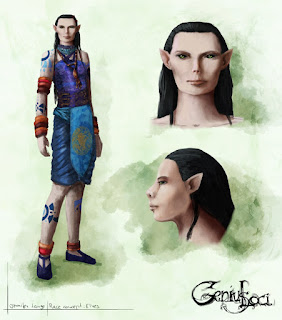 Elves depend on an intact environment. A long unchanged town, even bustling with people, will do just as well as a beach or forest. It's fresh destruction that affects them; mining, logging, large construction sites. Many elves are engineers and architects to ensure a nature-friendly process.

Mentally, elves are often absent, or seek solitude. They long to understand a wisdom that seems just beyond their reach, making them prone to mental disorders like obsessions or paranoia. They partake in society less and less with age, focusing on their meditations.


Artist's notes
Every good fantasy setting needs elves; I found them the most difficult race to design. I dislike the over-powered elves of common fantasy: unbelievably beautiful, overly smart, and - of course! - magical. I wanted the Genius Loci elves to be a people than can be interacted wit, that can appear as normal inhabitants of the world, yet retain some of the mysterious qualities of traditional elves. I think they turned out okay, with the similarities in appearance and spirit affinity. By the way, elves are equally often mages and wizards.
Posted by Ranarh at 03:04 0 comments