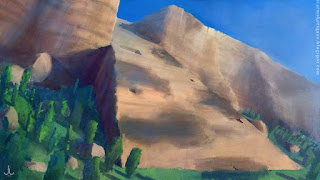 Artists' notes
Every decent fantasy setting needs some monumental landmarks, doesn't it? There are a few in Genius Loci, but the stairs are among the useful ones, which I discovered while telling their story is worse to the natives than an entirely useless one. It's like employing knowledge gained through torture - you can't ignore it, but you feel dirty using it.
Posted by Ranarh at 08:35 0 comments

The illustration previously published in the article on animal lords can now be seen on deviantArt as Asgaan, queen of the orlas.
Posted by Ranarh at 08:19 0 comments