Gdera is the largest continent of Kitas and promised to the West, element of Life. The continent of forests is indeed covered with woods, named after the colour of their main vegetation; the Red, White, Blue, Yellow, and the Lesser Green and Great Green forests make the majority; each has its own kind of fauna and flora.


"We have to get through while the wind blows in from the south. We'll never make it to the pass if the full scent comes down on us."
— Braq, yellow forest guide

At Gdera's east coast lies the ocean of the Green Ryaq, which blooms with edible algae harvested for the markets, and the scent is carried far into the land. In the west lies the Singing Ryaq sea, sending its songs over the lands.
Most humans are gderans; flexible, with sharp features and shiny skin. Many elves live in the untouched woods, where they're safe from destruction. The powerful country Gderet is called an elven land, ever since eight centuries ago an elf married into the royal line, and the majority of its people are indeed elves.

"Alchemists import all kinds of plants from Gdera, that's always good trade. Except that one time when a howling box cracked open and mate Djixen went to catch the contents. Lost a good sailor that day."
— Hirall Govapoer, trade captain 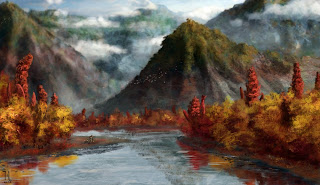 Artist's notes
I never get tired of painting forests; fantasy forests offer so many possibilities, it's hard to keep them orderly since I have so many ideas that I want in there. I have to remember every now and then that people should be able to live there as well. However, southasian or southamerican cultures live in the jungle, I mean, really with jungle all around, so Gdera shouldn't be a problem.
Posted by Ranarh at 01:39 0 comments 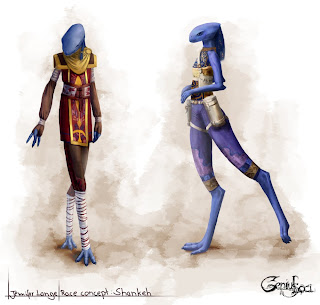 Artist's notes
I find shankeh both tragic and cool. There is a background why shankeh are so very different, but I don't think I'll reveal that just yet. That said, they are a great storytelling device - the trustworthy messenger can get into all kinds of troubles, or ask for help, hand over dangerous messages to innocents, or the wrong people... infinite possibilities of what could go wrong.
Posted by Ranarh at 08:27 0 comments