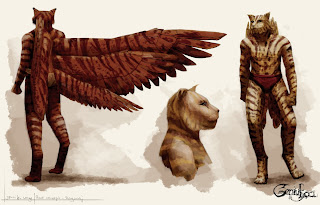 The six-winged raganaj are the tallest race of Kitas, standing an average of two and a half meters. The stripes on their thick fur convert into blob shapes towards the front. Colours go from dark chocolate to pale gold, the stripes from faint orange to dried blood, their green eyes provide nightvision. The feathered wings allow silent flight. While the upper wing pairs are used for lift, the lower, smaller wings are for steering; the pawlike, clawed hands lack fine dexterity.
Psychologically, raganaj enjoy their physical gifts, and use them to their advantage in life and work. Many raganaj are fighters, soldiers, or guards, or work in strength-demanding crafts like smithing or carpentry. Dancing is popular with raganaj - and their audience, which enjoys the extra movement flight adds. However, raganaj are equally often found in social work like politics, psychoanalysis, and as bards. All raganaj dislike confined spaces.


"The bard sung tales of love and despair, and many a tear was shed at his words. His fur shone like an aura in the tavern lights, and gave an eerie sense to his voice as if it came from a half-wake dream."
— Errinnö Silversmith, villager 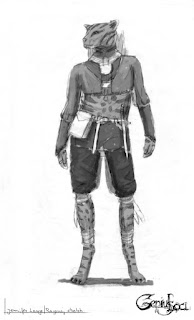 Most interesting about raganaj is their companionship with the solano. These small, plump creatures come to a raganaj in his early teens and form a strong bond. Cosmologists have theorized that the raganaj spirit might be divided or lacking, and completed by a solan. Others simply see a special friendship; however, raganaj without a solan are regarded as defective. The raganaj themselves believe it's the solano that make them peaceful - more peaceful than a born warrior might be otherwise, and that their little friends open their hearts to others. Raganaj indeed have a sense for romance and aesthetics, making them successful in working with people.


Artist's notes
I gave much thought to the anatomy of raganaj. How their flight works (it probably wouldn't, in our world. But then, a pterodactylus had a wingspan of seven meters), how the wings would fold, how they would dress, and how it would be to others, having flying neighbours twice your size. I especially like the idea of giant war-creatures being romantic and soft-hearted.