Commonly abbreviated the Great forest, it grows in tropical climates. Everything's bigger: trees grow hundreds of meters high, animals are the size of ships, birds carry wagonloads of passengers, cities fit on a single treebranch. While not generally hostile, the forest is ignorant towards its inhabitants, and some predators even hunt people. The tallest trees are kilometers apart and a cosmos in themselves. Many legends are shrouded in the misty depths of the Great forest; some of the biggest trees even have counterparts in the Area.


"The outlanders squeaked at the sight of the burrmos, and called us wild when they saw how we got rid of them. I wonder what they would call the darkdwellers down below, who we call wild."
— Erj Ilisess, Great forest hunter 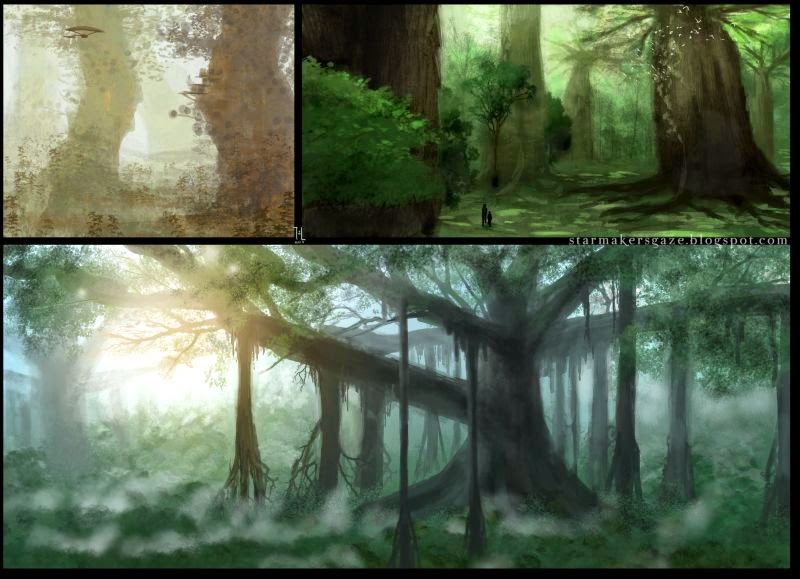 Life resembles that on islands. Anything the Great forest's inhabitants need is on their own tree, and one tree can house several tribes or settlements, and many animal herds; navigating unfamiliar heights is difficult. Travel is all but impossible on the ground  - if it can be found in the first place - and is instead done on high roads, built on stalks, or with climbing mounts. The peoples are hardy, used to unchangeable surroundings, and look down on soft outsiders; due to animal dangers, even city dwellers can handle weapons. Clothes are thin but strong and decorated with prestigious jewelry.


"From the topmost branches, you can see the dryad tree standing out red-leafed against the green forest. Many tried, but no-one ever found it. Or maybe they have and the dryad spoke to them - but that can't be, they returned safely, after all."
— To-pile-mok, gderan merchant

Artists' notes
I've done more illustrations showing the Great forest than the others - this is the secondmost widespread forest next to the Lower Green. I look forward to inventing gigantic animals; riding insects, snakes the size of trains and so forth (even if there seems to be some kind of contest going on in fantasy media who dares use the biggest trees). And some of the most civilized parts of Gdera are here, like Clom Vah or Gderet.
Posted by Ranarh at 02:47 0 comments