The Making of the World

Before the beginning of Kitas, the Great Spirit gave mighty foci to the Four, and they created the world with them. First, the Axeswinger made the unliving world, the land and air; then the Spearbearer made it move by giving the fire; then the Swordmaster brought compromise between endurance and change by adding water to unify both. Finally, the Bowarcher put living creatures into the world. When this was done, the sun rose for the first time, and the Four died, and were chosen anew by the Great Spirit among the new beings.

"The Four are equally obvious and secretive, and while you will always know them when you meet, we usually know little about the Four. Where they came from, who they were; with some notable exceptions, like Lady Ghelined."
— Farganah, historian


How long it took them to make the world is unknown, and theories are wildly debated among scientists. Just as unknown is the species of the First Four, but there is a traditional canon assuming the Axeswinger to be a rhu'khach, the Swordmaster a beja, the Spearbearer a raganaj, and the bowarcher an elf. Since nobody today knows the shape of a rhu'khach anymore, the Axeswinger is commonly depicted as either a tall human or a fantastic creature assembled from different sources.


Artists' notes
This is how Kitaians assume the world was made. Because the Four are the primordial beings resembling gods in Genius Loci - making them kinda important -, I come back to them time and again. Being one of The Four is a title, not a trait; they're not reborn, but new Four are chosen every cycle.
Posted by Ranarh at 03:48 0 comments

Email ThisBlogThis!Share to TwitterShare to FacebookShare to Pinterest
Labels: mythology 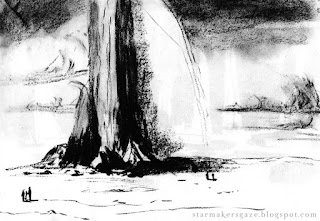 Glaspia, a southern Gderan country, spent centuries pushing its border northwards. Its neighbours might have objected, if it hadn't been for the wall of Sabiré, growing in Glaspia's hinterlands for almost three millenia. During a speaker war in 3602EL, the spell relic was caused, and the wall that rose due to it didn't stop growing until two centuries ago. It is only a few hundred meters wide, but now over four thousand meters high and several hundred kilometers long. It influences local weather significantly and has created drylands on its western side.


"Ah, the mages around here never let you hear the end of it. A wizard appears, and they start whispering there's going to be another wall, as soon as we cast a spell. It might be interesting to the voiceless that most civilized regions were disrupted by mages' spell relics, not wizards'."
— Emketju, wizard

As all landmarks of importance, Sabirè's Height, as the wall is also called, is inhabited by a nature spirit. Ednini is very tall, and strange. He has not been at the wall for long, but his presence has caused local plantlife to improve greatly. Unlike other spirits, Ednini speaks a lot, is easily upset, and wants company. But since most people think the wall to be cursed, scary, or uncomfortable, he has little of it and jealously guards what few people he has.


"I almost pitied him, being so alone, if he hadn't been so creepy. There are almost no mid-sized spirits around the wall, only Ednini and the tiny ones in the plants he helps growing, and in some rocks. Maybe spirits, too, go mad when left alone?"
— Wenemmes, traveller


Artists' notes
This is one of those places where the things you hear about it are almost all wrong, over the top or way too harmless, and most things you can't learn at all. Nature spirits had personalities before, but with Ednini I discovered they could be influenced by supernatural affairs as well.
Posted by Ranarh at 03:35 1 comments

"This was the fourth threshold we stepped through in these mountains. The map says nothing about it, so they must be new - I worry who would poke holes into the Here in six valleys."
— Szagrat, traveller 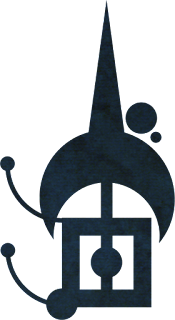 An Area threshold is where one can step over into the Area. Natural thresholds are, as many things about the Area, seemingly random - any crossing could lead into the Area, a riverbank, a door, a line between shadow and light.
Artificial or drawn thresholds are easy to make, but require precision, and are best done by signmakers. Each of the four corners, then the opening, of the threshold-to-be is marked with the First Sign "Create Threshold". Because this last, fifth sign must therefore always be made into the air, and First Signs are complicated, it's hard to successfully create a threshold artificially.


"That was your tenth, no, eleventh, attempt at it. I suppose we can always wait for a Nightly Traveller to happen by when you're having such trouble with that damn threshold... I'm just joking!"
— Jagir, to Vramde

Artists' notes
Because Genius Loci is also built as a roleplaying world, sometimes I think in terms of difficulties for dice rolls. But imagining how it actually looks is exciting; making a threshold should be mysterious and strange. Most travellers know how to make one, even if not all are good at it.
Posted by Ranarh at 03:46 0 comments