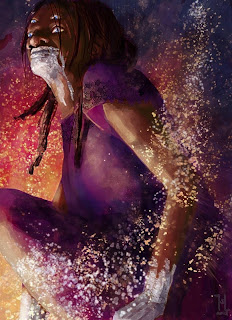 Loss of sanity and various forms of lunacy are common in lands where you might fall into a parallel world at any time, or lose your mind to solitude. The different species are prone to various forms of mental issues. Some views are considered insane as well, like racism. The survivors of spirit attacks, either by the dead or placespirits, are never sane again, but results may vary.

Dwarves cannot endure loneliness and become erratic and obsessive when exposed to solitude; this is normally addressed by making sure dwarves need not be alone.
Elves easily suffer from delusions or paranoia. They often feel like they're missing out on some greater truth they could understand if only they opened up towards... something. It can be difficult to keep track of the longlived elves and their issues to get them help in time. These are but two examples; all species have their peculiarities.

"At first it looked like a simple poisoning, nothing to worry about. Then she started seeing things and talked to the forest. On the fourth day, she bit Relgaan and fled into the canyon; Relgaan has never spoken again."
— Orewasse, traveller

Time and again, people leaving the Area think themselves to be the servants of Starmaker, and of course her favourite. These raving lunatics pursue unfathomable goals, sometimes even violently, and almost always end up in the voices' care.
Goldfairies are hard to understand at the best of times. They all have secret goals and one together, it seems; they can often be found talking to themselves or the furniture, and stop in midsentence when they become aware of company. It requires patience to handle them.


"Sanity is a matter of circumstances. Are the Redforesters insane for living in poison? Is it mad to build on a volcano?"
— Hafana, scholar


Artists' notes
There are plenty of dangers - wild animals, illnesses, curses, volcanoes, elementarians... but I didn't want to leave out insanity. After all, it's a good explanation for some rulers' behaviour. And I like it better than them being eeeeviiiil; since I ruled out the Evil from Genius Loci, I thought it'd be better to blame it on loss of mind when rulers become cruel.

"I'm not wearing that. I'll look like a humped idiot. I'll rather freeze my tail off."
— Badhea, Gderan gar

The garren have a crest down their back, from between the eyes to the tip of the tail. This argues with clothes, but craftsmen have long found solutions.
Garren shirts and trousers have straps sewn on to go over the crest's dips. Stiff, backless shirts are held up by the sleeves, or are worn with a ring on the neck and another around the waist. Garren can have the crest slit to fit fasteners through, or have it pierced with a knobbed fastener to tie clothing to; this is usually done by hairdressers. Buttons can be glued to either side of the crest with strong resin, and wearers may need help buttoning up. And of course, some simply wear pull-over clothes; when made of heavy fabric, they weigh the skinny crest down.
Trousers are cut to allow room for the tail but have some excess down the tail to cover the buttocks thoroughly; some regional costumes enclose the entire tail. Garren clothes are more expensive when they are snug fits.

Aesthetically, a standup crest is sightlier as well as more comfortable, and well-tailored dresses are prettier than bulging backs. Garren much prefer warmth, and cold regions sport special makes that enclose the crest separately. Morégar have it easier, with straps that fit right between the separate spikes. In general, since the garren are changeably colourful and care for aesthetics, sufficient garren population means the traditional dress takes their needs into account.


Artist's notes
I've had discussions about my lizard people wearing normal clothes, with trousers and shirts despite their crests. My argument stands; if the dominant culture says to wear clothes, you will wear whatever keeps you warm and decent - what's the point of looks when you die of cold?
Posted by Ranarh at 11:01 1 comments

Art on deviantArt: The Empty Lands

The illustration accompanying the recent blog entry about inner Lozir now also appears on deviantArt: The Empty Lands.
Posted by Ranarh at 06:25 0 comments 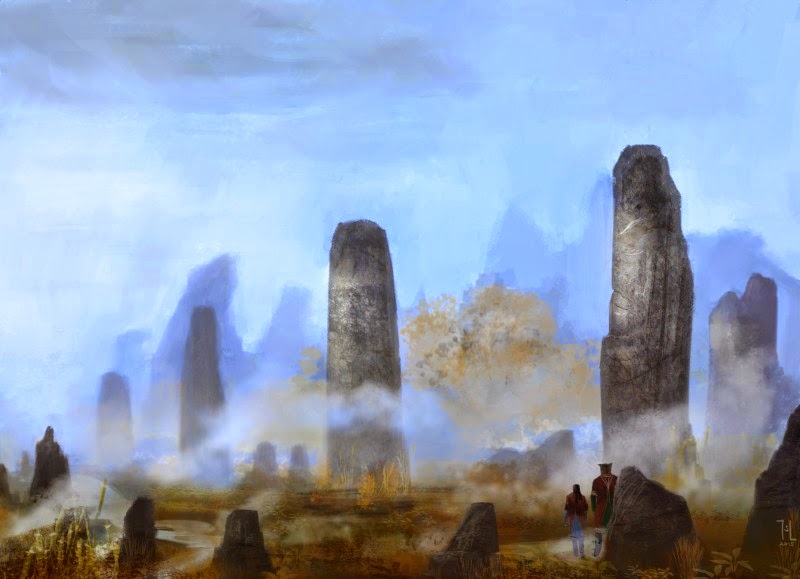 
Artists' notes
One of those places that came from a painting. It became more mysterious and finally almost hostile as I watched and built it, until finally, it became a taboo place that only the most daring adventurers will go into. That's okay.
Posted by Ranarh at 16:06 0 comments