"Many people make a little fun of us, as if we're funny old grandparents with spleens. We find that easy to overlook - we hand them a telescope, point them to a new star, and quietly smile about their wonder."
— Wilegund, nightreader

Astronomy, or the science of the stars, is a known but little practiced subject among scientists on Kitas, since most of their tables and charts are interesting but useless to the average person. Still, sailors regard them as lucky charms and like getting the newest updates for their navigation. New stars are born all the time in the two nebulae, and the two moons as well as the Eye and its moons - the planet following behind Kitas in its run around the sun - present many scientific questions.


"If only my daughter had not decided to become a nightreader. Useless enough to have two mapmakers in the family, and I never understand what the three talk about when they visit."
— Pien, farmer


When they aren't roaming the lands to find any and all stars, their guild is busy talking rulers into financing and building bigger telescopes. The latest and biggest success of that is the enormous telescope of the Bargassa engineering school. Nightreaders and mapmakers share an interest in the navigational value of new discoveries, and are often found in debate along travelling routes' inns.

Artist's notes
Since I threw out prophecy and religion, the usual fantasy meme of reading the future in the stars doesn't work for Kitas (and with that, star signs, horoscopes, and the likes). In my opinion, navigation fully justifies interest in the stars, and so nightreaders are cause for expensive prestige projects, and otherwise, as the quote shows, regarded as maybe not useful, but nice to have.
Posted by Ranarh at 03:10 0 comments

Email ThisBlogThis!Share to TwitterShare to FacebookShare to Pinterest
Labels: profession 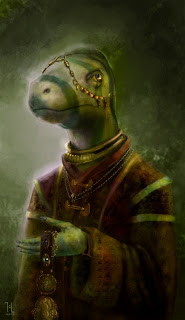 There are two schools of spellcasters: Mages and Wizards, together called speakers.
Mages follow the teachings of Ghabnah, who postulated that in order to understand the world, one must first understand every aspect of it. Mages cast formulaic spells that produce reliable effects depending on skill.
Wizards believe in the wisdom of Turachgekhan, who claimed that only by understanding how everything is connected, can the universe be understood. Wizard spells are powerful, but cannot be repeated the same way.

"Calling us undisciplined - ridiculous. Only a fool will fail to recognize the effort to juggle all the world in one's mind."
— Numi Ashkarot Bel, wizard 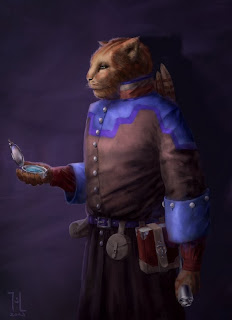 Both are equally regarded by society, have equal numbers, and show equal power. They are often at each others throats for absurd reasons; speaker wars are usually short, but devastating.
Because of their philosophies, wizards tend to occupations supporting widespread knowledge, and prefer social sciences; while mages like to quantify, and do so in natural sciences. This is supported by mages having a natural knack for all measurements, and wizards' gut feelings being always right.

"Laughing about tables and equations suits the wizards well. How will you recognize two things are related if you didn't understand either in the first place?"
— Absil Blackmane, maga


Despite their disrespect for one another, the two factions let candidates choose freely. Mages provide schools and exams proving the young mage's cunning. Wizards travel and keep their ranks loose, and often devote themselves to one or two of the Four elements and their principles.

Artist's notes
The speakers are sometimes difficult to balance, but I love the idea of scientism vs. intuition, and I am undecided which I like better. Most fantasy settings I know feature more groups, like witches, druids, several mage's guilds etc. Because there only two parties in Genius Loci, their members will be more versatile and individual.
Posted by Ranarh at 12:33 0 comments