"Seriously, there's only two species in your village? Odd."
— Kalimaik Gennidar, Gamahanian, to a traveller 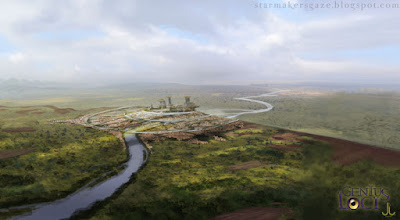 Gamahan is Sawa's council city, and as such invites emissaries from all lands and tribes for talk and trade. Like all three council cities it's an own state, and may be the oldest city in the world; legend tells it stands where the spearbearer put down the spear Lefenned for the first time after the making of the world. The architecture is rich and diverse, and filled with primeval mechanics that are taken care of by the engineers from the neighbouring state Lebridge. Gamahan spreads over a cliff, with two thirds up above, and the rest down in the plains.

Gamahan means "circled land" in the old language Sorit, and the four city walls are perfect circles, spreading flawlessly over the cliffs. Each of the four boroughs is dedicated to one element and shows it proudly, with the western quarter (the Forest or Green Borough) being practically a forest, while craftsmen flock in the eastern quarter (the Earthen or Yellow Borough). The city's center is the Plaza of the Heavens, a gigantic open space surrounded by the world's supposedly most ancient structures, among them the famous Magician's School. Gamahan is infamous for its predatory paperwork - travellers may find themselves dutiable citizens sooner that they think.


Most places have a traditional costume, but Gamahanians dress eclectically, only striving for a simple elegance. Common clothes are straight trousers and short-sleeved pullover shirt. In the third circle, nobody wears a hat; otherwise, clothes are combined freely.


Artists' notes
I made an ambitious street plan of Gamahan early on which had to be discarded because of its many mistakes; but the general structure, and some of the deep secrets have never changed. Although almost everything else about the council cities' role has - the geographic location, population, inner workings...
I don't dare call the image a matte painting, but it's drawn over a photo. I use this technique for concepts sometimes.

This article was sponsored by Samuel Ruggieri ( CEO http://voyagergames.com ) via my Patreon account ( http://www.patreon.com/JenniferLange )
Posted by Ranarh at 10:35 0 comments

The Patreon platform offers the chance to support creatives directly. Keeping Genius Loci going, and expanding the amount of work and time I can invest in it, will be much easier with support from you. If you like my world, I'd be very happy if you'd lend me a hand on Patreon: http://www.patreon.com/JenniferLange
Any support will be greatly appreciated! There are rewards to be had for your pledges, like cheap commissions or in-depth looks into my work.