The recently posted Standing Stones of Vrebin (see the article here) are now on dA as well, as are a concept of the red forest - ever so delightful to plan a poisonous forest - and the fierce burrmo (who also already made an appearance here). And last but not least, a repaint of the Watching Tree, an older image showing the Area.
Posted by Ranarh at 09:44 0 comments

Perhaps one of the most dreaded people alive, Queen Dil-tona rules in western Lozir. She is known for her elaborate curses. The issue with that is, of course, that curses fall back on the curser to some degree, and the sheer amount of curses muttered by the queen is enough to make anyone else snap. That she still seems more or less sane is puzzling to experts of the field. It is unknown from whence she came, and even how exactly she came by the throne is forgotten, although most genealogists agree she wasn't a child of the former king. They say Dil-tona is a Dohl Churon, which might account for her great supernatural powers. 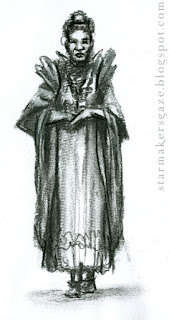 "My aunt came from only the outer fringes of Dil-tona's realm, and still was caught up in a curse that made her lose words all the time, and that took almost a year to get rid of. She hasn't set foot in Lozir since."
— Grawada Imnirun, merchant


The realm of Dil-tona is not closed to outsiders but few travel there, and few natives leave - not all the neighbouring lands accept them either, because they're afraid of what the refugees might carry. Curse-carrying is unusual and difficult, but the queen masters even that almost effortlessly, feeding the fears.
Nevertheless, the queen is beautiful, and as love goes, some men with heart feel they could save the queen - or the land - by softening Dil-tona. None have succeeded, and by now the row of wooers' graves is almost longer than the line of the wooers themselves.

"Who knows how many of the curses of the Empty Lands trace back to the Lonely Queen. One can only hope the stories about her finding love and being cured by it are true, and that someone endures to give it to her."
— Sraminar, Lozirian noble

Artists' notes
Creepy rulers, cursed somehow, who can only be swayed by true love, or the famous true love's kiss, is a classic in fairy-tales, and as such has of course found its way into Genius Loci. I won't tell if that can actually turn Dil-tona from a bloodthirsty lunatic into a lovable woman. But it would be nice if being loved could do anything, wouldn't it?
The sketch is a design sketch, and I'm not set on it yet. Making an atmospheric illustration for Dil-Tona is of course mandatory, but it'll have to wait since it's been so long since my last article here.
Posted by Ranarh at 10:47 0 comments