Gubras are popular if difficult pets. They are hard to tame, and have a reputation of being grumpy and only moderately child-friendly. Most famous today are the gubras of eastern Lozir. Many tribes hunt them for trophies or to keep them as pets; when one hunter's spear broke off in the proud gubra lord's flank, Gahatenge urged his kin to leave the treacherous humans, and return to the wild.


"Why I recall my kin? I am their lord, and you show so little respect for me - what will you do to them? I fear for my people. And as I see that some will not heed my command, I was right to."
— Gahatenge, to a listener 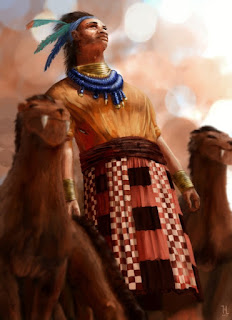 Some of those who followed immediately had to fight their way out, and since the command, meetings between wild and tamed gubras are even more difficult. While Gahatenge has a temper, he is a wise and far-sighted ruler, and it was expected he would forgive those who stayed; that he has not done so, observers find unsettling.
The lord appears as a muscular, tall southern man neglecting his hair, his elongated neck and pronounced teeth giving away his origin. He has been reported to hunt with his kin alongside humans, but not since his return call.


"I wonder why something as simple as a spearhead drives Gahatenge to such grim measures. He is a powerful warrior, and judging by his scars, surely he must have endured worse?"
— Wanailaka, wizard

Artists' notes
I like giving animals characteristics, reasons, and arguments that people simply can't follow. Animals might argue, why build a cathedral when a hut serves the same purpose, and at the same time insist a certain flower mustn't be eaten for obscure reasons.
Posted by Ranarh at 08:55 1 comments