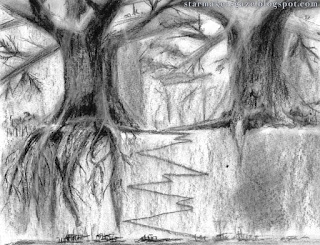 "The discrepancy between the rough cliffs and the friendly citizens, the bright port and light-dappled city, the carelessness and involvement of Clom Vah is nothing short of puzzling, and amazing."
— Lerronor Stronghand, traveller

Clom Vah is the council city of Gdera. All Gderan states and peoples send emmissaries here for talk, trade, and dispute. It lies at the bend of the Mahal Bay on the east coast, atop a sheer cliff, and is built into the gigantic trees of the Great Green forest, the boroughs connected with hanging bridges, high streets, passenger birds, or even sailgliders. Its only competition in importance is mighty Gderet's capital Etnaprishta.
Most famous is the Clomvahian voice hall, the largest there is, roofless and housing the sitting dryads' statues, as well as a large number of voices, and a veritable army of listeners.


"There's no point in denying one's own fault, and stupidity and pride along with it. Better, and wiser, to admit, and fix, and no tears will have to be shed."
— Gderan saying 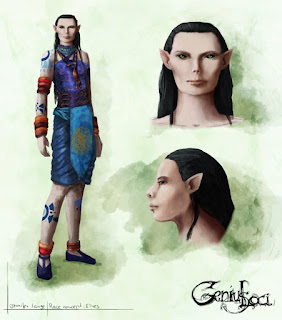 The Clomvahians dress in vividly coloured chestcloth and hip-wrap, and what skin shows is bedecked with large jewelry and graphical shapes of paint. They are, as most Gderans, happy to share living space, and Clom Vah's streets are bustling with animals. Clomvahians embrace the new, are optimistic to a fault, very forthcoming, outspoken, and open-hearted. Some visitors are irritated by this, but the chance of meeting an actual Clomvahian amidst all the travellers is only one in three.


Artists' notes
I remembered adventure novels of my childhood, describing the foreign ways of exotic peoples, and wanted some of that to be mirrored in Clom Vah's culture - almost radical, but suitable to their environment; certainly strange, but relatable; and smart, even noble, once understood. The idea for the traditional dress came from the elven race sheet. I recently developed institutions of Clom Vah which will be introduced later, like the Mage's School.
Posted by Ranarh at 03:41 0 comments 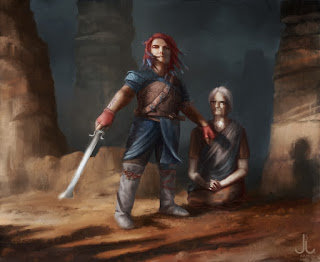 Listeners are the voices' armed forces and carry out their orders. Many were voices themselves and trust them implicitly, but anyone can become a listener when approved by the voices; some join the ranks as pilgrimage or for repenting crimes and sins.
Some rulers grant listeners ambassadorial status and help in their tasks, others point out that listeners, other than voices who are utterly truthful, are just regular people and might have their own agenda. The treatment of listeners has been in debate for ages.


"The council doesn't care if the voices send an army of listeners! We will not agree to any search of the catacombs unless we hear it from a voice that they need to!"
— Short Jugiel, councilman

All listeners are skillful warriors, focusing on traditional weaponry associated with the Four, as well as experts in manners and travel. Accompanying the infirm voices is a common task, but they do much more; they seek out collectors, negotiate with elementarians, acquire artifacts... They often hire more hands for extensive tasks.


"No, I have no idea why I am taking a sealed spear across half of Lozir and into the Singing Ryaq. That's what trust is for, and I trust the voices with my spirit."
— Shagruun, listener


Artists' notes
Stuff for legends is what listeners are. Some of the greatest heroes currently alive are in service to the voices, like Vranu Whiteblade. Many of the fantasy settings I enjoy, particularly computer rpgs like the Elder Scrolls, have several orders to join, and the listeners are one of those - handing out tasks of increasing difficulty to the heroes, with appropriately increasing prestige for surviving each one.
Posted by Ranarh at 02:51 1 comments