Art on deviantArt: Not another step, Burner, Nord

New artworks for Genius Loci on deviantArt are: Not another step, showing a listener and voice;
http://ranarh.deviantart.com/art/Not-another-step-637202293
http://starmakersgaze.blogspot.de/2016/09/listeners.html

a burner, member of the order of the same name;
http://ranarh.deviantart.com/art/Genius-Loci-Burner-638555646
http://starmakersgaze.blogspot.de/2016/10/the-burners.html


and a portrait speedpainting of a nord, the humans subspecies from the polar regions.
http://ranarh.deviantart.com/art/Genius-Loci-Nord-630460008
http://starmakersgaze.blogspot.de/2012/07/genius-loci-races-humans.html
Posted by Ranarh at 04:26 0 comments 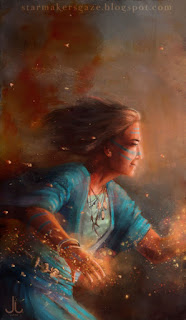 The Standing Stones of Vrebin

As any standing stones, nobody can say when they were erected or who did it, and if one falls, they stand up again. Vrebin in southeastern Lozir is a widely known and mighty place of power. Around a handful of tall rock spires lie some buildings and ritual places; it is particularly attuned to cleansings and whisperings, and so, many craftsmen and collectors come here to do their work. Like most, the stones stand on a power knot. The actual city Vrebin lies some distance away, but is named after the same speaker, who first established the standing stones as a ritual place.


"I am going to Vrebin to become a speaker. I have long dreamt of it, as many of my family are speakers too - now I will join them. It must be wonderful to finally feel the Fifth Power."
— Enmit Riumnin, villager

Many places of power are protected by speakers, but of only one tradition at a time. If both traditions send guardians however, they always fulfill their duties harmoniously. The wizard and mage in charge of the Vrebin stones are known to be reasonable and understanding, but still hard as nails - they will not tolerate any violation of the rules. Among their duties is the keeping of the peace, but they also are caretakers of several dangerous artifacts, the mightiest being the Bloodcollar - the infamous necklace that, despite its power, is undesirable to most, because it got all its wearers killed; several times even by placespirits.


"Five attempts to steal the Bloodcollar, like there's a war coming. Don't they understand how dangerous the cursed thing is? I will send listeners to smoke the raiders out."
— Guard Olripe, to Guard Vastumid

Artists' notes
Menhirs are really cool, and I like "nobody sees how it happens" a lot, and made them erect themselves, like grass growing. When I came up with artifacts, I asked myself, where would they put the really dangerous ones? The answer is of course, you'll put it in a place where people are so powerful they can defend it against virtually anything. And so, standing stone sites are vaults for the most dangerous artifacts.
Posted by Ranarh at 08:15 2 comments