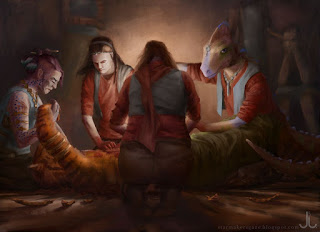 Artists' notes
There's always this chance when building a world that you either make it a hellhole where everything's dangerous and rotten, or way too nice because every problem has been solved, so I design diseases and poisons carefully (and civil wars, insanity, and tyrannies). The red forest may well treat everything there is from cancer to the common cold, but finding anything is bloody difficult. Literally.
It's fun to come up how elves react differently to things, and define the miniscule differences between species' physiology, seen from a medic's perspective. There are of course lists of these, but I won't bore you with them.
Posted by Ranarh at 02:16