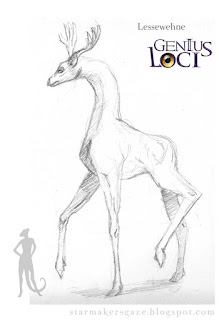 Artists' notes
I painted a creepy giant beast ages ago for a surreal card game, and the basic idea stuck with me until I could make it work for these beasties. It's fun to make animals stick to the general impression of the single coloured forests.
Posted by Ranarh at 05:01